In a bid to discover more about its target market, a newly launched double dating website has conducted a study into the importance a friend’s approval has when a new boyfriend is introduced to the circle of friends.

According to the study, two fifths admitted to needing their friend’s approval whilst 12% would even end a relationship if their pals didn’t approve.

The site conducted a study with 1,193 single women across the UK in a bid to discover how important their friend’s approval is when they start dating a new partner.

The research was conducted by the newly launched online dating service with hope of getting a better understanding of its target market.

The research initially asked the respondents if they needed their friends approval when they started dating a new person, to which more than two fifths, 42%, answered ‘yes’.

The respondents to the study were asked if a friendship had ever ended as a result of one of the friends not approving of the others new partner, to which 14% said ‘yes’.

Subsequently, more than 1 in 5, 21% of the respondents said that they felt ‘nervous’ when introducing a new spouse to their friends for the first time.

Speaking about the findings, Luke Pomaro, founder of datewithamate.com, said the following:

"As we are still pretty new to the industry we wanted to really get to know our target market and felt that this study was a sure way to do it.

"As a double dating website we were confident that a friend’s approval on a new partner would be important, however I am shocked that women would actually end a new relationship based purely on their friend’s disapproval."

He continued: "I appreciate the importance of a friend’s approval, however I don’t believe it is that important that if a friend doesn’t approve the relationship should be ended.

"The grounds of a healthy relationship are ultimately down to the two people directly involved in it and as long as they are happy together that should be all that matters."

The research was carried out by www.datewithamate.com 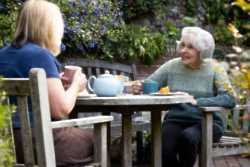 My mother in law doesn't care about my husband...