12 Things you should know before dating an only child

They may have trouble with sharing...

Only childs like their space- If they venture off upstairs or ask for a night alone- they are not mad at you- they just need some 'me time'.

They are not overly tactile people- They are not the type to drape themselves over you for too long- nor do they like to be pinned down on the couch in a sideways hug. Cuddles, hand touching, linking arms etc. all have their cut off point so don't expect to spoon all night long in bed.

They don't understand sibling rivalry- The competition that goes on between you as to who is doing better than the other and who your parents favour more- they just don't get it- but they try.

They probably only want one child- That is what they know so they see it as the norm- however they're aware that you may see things differently.

They can entertain themselves- With a little help from their imagination and self-soothing they got from playing on their own when they were young, they have probably found a hobby later in life that they can do without others. They don't see it as a bad thing so you shouldn't either.

They will adopt your siblings as their own- Although they don't mind being an only child- your siblings are the closest thing they will ever get to having a brother or sister - so they treasure their company and friendship.

They may have trouble with sharing- Bear with them- they are not selfish- but they were never expected to share as much as you were- so if they don't offer you food of their plate or a sip of their drink- they are not being self-centred- it's just what they're used to. They will learn over time with you how to think outside the box a bit more.

They may be overwhelmed at your family size- If they are only used to three people at dinners and outings- any more than that can be a little scary. Give them time to settle in to large tables of people and lots of chatter.

They like silence- They can go whole car rides without saying a word, minus the radio. They can sit on the couch and not feel the need to fill in the blank space with unnecessary noise. If they go out with your folks they may need some quiet time afterwards- it's not an insult- they simply aren't used to so much going on.

They like to have your full focus- Don't think about texting or watching TV while you talk- they want to know you care about what they have to say from years of being the main focus of their parent's attention.

They like their own way- They don't take well to the word 'no' so it might help you to find other ways of sugar coating this and be able to negotiate with them wisely.

They are close to their parents- You must respect their need to call them and visit them because they are their best friends and they tell them almost everything that goes on in their lives. 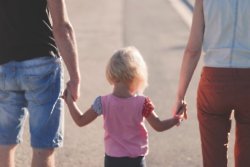 What does it mean to dream about parents?

My parents hate my partner- any advice?

Should I contact her after 30 years to say sorry?