Beware of Frisky Friday! The peak day of the year for affairs is TODAY

Adulterers are grabbing one last chance to see their lovers before going away with their families.

Britons cheat more when the weather is hot - and the peak day for affairs is today as the schools break up for the summer holidays, according to a new study.

The whole week before the big summer getaway is the busiest of the year for extra-marital activity.

And it reaches its peak on 'Frisky Friday' with adulterers grabbing one last chance to see their lovers before going away with their families.

The first three weeks of July see a 25% rise in activity in extra-marital dating sites.

This shoots up to 54% higher than normal in the third week with a 70% rise on Frisky Friday - the busiest single day of the year for affairs.

Flaming June is appropriately named because it is the second busiest month for cheating.

The third most popular month is September, as cheats hook up with lovers again after going away with their families.

The fourth most popular month is January, as adulterers return to their secret partners after spending the Christmas break with their families.

The results are revealed in a new survey of 1,000 people IllicitEncounters.com, the leading dating website for married people.

It found that 82% of adulterers stay in touch with lovers while they are on holiday with their families.

The most popular method is by text, followed by phone chats, FaceTiming, email and Skype.

And 62% of cheats hook up with their lovers within a week of returning home.

One in ten cheats 11% see their lovers while they are away with their families - either by arranging to go to nearby destinations or holidaying nearer home.

Four out of ten adulterers (42%) go on two summer holidays - one with their families and one with their lover, most commonly using work commitments to hide their secret break.

The most popular destinations where adulterers go on holiday are Spain, followed by Italy, America, Thailand and France.

IllicitEncounters.com spokesman Christian Grant said: "We are experiencing the busiest three weeks for cheating as we head towards the big summer getaway.

"Adulterers are grabbing one last chance to have a bit of fun before they head off for two weeks away with their families.

"Cheating peaks this Friday when those having affairs can excuse their absence from home by saying they are catching up with work colleagues before the holidays.

"All IllicitEncounters.com research shows that the summer months are an incredibly busy time for affairs.

"The sun makes us more optimistic and open for adventure. We are all wearing a lot less, too, and that makes people more likely to cheat.

"The long nights mean we are more likely to be outside socialising and meeting new people."

IllicitEncounters.com has more than 1 million registered members in the UK.

Its subscriptions rise by 25% over the summer months as more people look for fun in the sun. 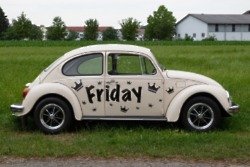 What does it mean to dream about Friday?

Is your man a pisces? He’s most likely to cheat

Could you live with a cheating spouse?