Women would rather give up sex than chocolate

Women said that giving up chocolate would be a lot harder with 22 per cent saying it would be last thing they would give up.

It’s any man’s worst nightmare, he’s thinking of getting down to the naughty business all the while she is thinking about a nice big bar of chocolate.

That nightmare has now become reality as new research from Cancer Research UK shows that women would rather give up sex than chocolate.

However, men feel very differently. When asked which would be the hardest thing to forego for one month 22 per cent of men said it would be sex, compared to only 9 per cent of women.

Women said that giving up chocolate would be a lot harder with 22 per cent saying it would be last thing they would give up.

This is probably because women are believed to have higher willpower than men once they set their minds to a challenge.

Over half of the UK agreed that our willpower is tested the most a Christmas as it is when we are at our weakest.

The survey also showed that the nation believes women are more committed to relationships and are also more likely to stick to a diet than men.

Robert West, professor of health psychology at the Cancer Research UK Health Behaviour Research Centre said, “When you take exposure to temptation and strength of desire out of the equation you are left with this thing called 'willpower': the force that our plans have in controlling our actions.

“Individuals with more willpower are probably more likely to achieve their objectives, whatever these might be.

“Some believe that willpower is like a muscle - it can get tired but it can also be strengthened with training.

“The idea is that getting people to practice doing something that requires self-control builds a general ability to do this.

“There are also studies showing that when people make their personal rules very clear with well-defined boundaries, they are more likely to stick to them.” 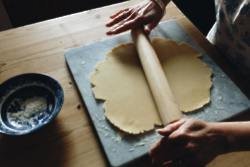 What does it mean to dream about pastry?