Here are just some of the things you might find familiar if you're dating someone who's hooked on horror.

To celebrate Chucky, The Notorious Killer Doll Day, we remind ourselves of what the lovers of horror fans have to put up with.

You get dragged to every horror movie that comes out at the cinema- Even if they know beforehand that it's going to be a stinker- they have to see it nevertheless. And if it didn't make it to the cinema- you have to find it and watch it at home.

They're a genre guru- Tell them the plot- they can name the film- name the actor they can tell you all the horrors they have starred in- name the director and they can rattle off which horror flicks they're responsible for. They would be great in a pub quiz if it was only on horror movies- you could just sit back and look forward to enjoying your winnings.

They are very critical of the genre- They know what they like and what they think makes a good horror so if they don't enjoy a movie you will get a full run down of why something else was better afterwards.

They compare- The most annoying thing about watching a horror with your SO is that they compare scenes from other movies. 'Well that's a copy of…!'- 'And where have they got that idea from? It's clearly a rip off of…' are common phrases used during film time.

They are hardy when it comes to scares- If there's a bump in the night- they will go and check it out- if you try to scare them they- have nerves of steel- you won't succeed.

Your DVD collection is made up mostly of horror films- So when you don't fancy a horror movie, which let's face it- is most of the time- it can be hard to find one that's not full of blood and gore.

They're unaffected by horror films- Yet if you watch one too many- you feel a little down and edgy because of all the negativity you've absorbed from what you've just watched.

They can watch them on their own- If you're away for whatever reason and ask them what they did with their free time- they often say they watched something scary- and you couldn't think of anything worse if you were home alone.

They don't flinch when they're watching something frightening or gory- If someone is getting chopped to bits or there's a tense moment where the baddie is going to have their big reveal- your partner watches it like they're catching up on the news, all the while, you're hiding behind your hands and pulling disgusted faces.

They love Halloween- The perfect excuse to dust off all their horror movies, watch them on TV, dress up as their favourite characters and celebrate their craving for creepy! 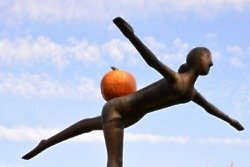 What does it mean to dream about a pumpkin?