If your lover longs for a lightsaber and yabbers on like Yoda- you're not alone.

Today is National Star Wars Day so we thought we would shine a light on those people who have to put up with a Star Wars fan for a lover and what it means for them.

Your partner doesn’t say goodbye as they go off to work on this day- Instead- they say ‘May the 4th be with you’ when all you wanted was a kiss and a ‘see you later’. There’s nothing special about today- it’s still a workday after all but they leave with a spring in their step nevertheless.

They will watch as many movies as they can tonight- They think it’s rude not to when it’s a national day so you always spend this evening apart. And they come to bed really late because they just can’t give it up until sheer exhaustion makes them turn off the TV.

They did make you watch them once- That was more than enough and a giant waste of your life. You had no idea what the attraction was then- and still don’t.

They talk in funny riddles- They think it’s funny to speak like Yoda and swap everything around- you don’t but that’s all you get all night and in the end- you stop talking to them.

They will drag you to the cinema on opening night- To see the latest instalment in 3D (of course)- even if it’s at a ridiculous hour. They have to be one of the first to experience it so they can brag to their fellow fan mates. At least you get snacks and a bit of naptime in the dark if nothing else- you have no idea what’s going on anyway.

When it comes to fancy dress- You have been Princess Leia more times than you can shake a lightsaber at and when he asks for role play in the bedroom- you yearn for him to choose a new film saga.

The music makes you want to scream into a pillow- You’ve heard it that many times- it now drives you up the wall. Whenever you hear it- it makes you want to leave the room- quickly and listen to literally anything else so it's not fixed on repeat in your brain.

They are easy to buy for- The one good thing about the reboot is that there’s loads you can buy them for many birthdays, Easters and Christmases to come to keep them happy. Even if you are a little embarrassed when they leave the house sporting a t-shirt with what looks like a big co*k on it.

10 Things you should know before dating a sci-fi fan 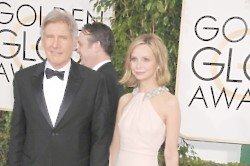 5 Things you never knew about Calista Flockhart and Harrison Ford

Hair colour and the dating scene