Sophie Morgan is a successful journalist who has just released her book The Diary of A Submissive which tells of her extraordinary tales surrounding being a submissive.

Sophie Morgan Reveals All In The Diary of A Submissive

We caught up with her for a chat about how she’s a normal woman, will never lose at Monopoly and isn’t interested in ‘rooms of pain’.

Female First - You’re a successful professional working woman, how did you get into submission?

Sophie Morgan - Even before I understood what sex was I was always fascinated when watching Maid Marion captured by the evil Sheriff of Nottingham and held prisoner. Why that caused a particular frisson I have no idea. But we all have our kinks don't we? I don't think being a professional woman who's quite confident and forthright in her day to day life is necessary a barrier to enjoying this kind of sexual play in your home life.

FF - What was the attraction to it for you?

SM - I think it adds an interesting and fun dimension to sex. I can only speak for myself, but I enjoy being on the back foot and not always knowing what's going to happen next. Also, there can often be a sense of being challenged that really appeals to me - it's not quite a form of competitiveness (although I am that too to the extent my family refuse to play Monopoly with me) but doing difficult things at the pleasure / whim of my dominant, whether it's to do something I find embarrassing or endure something painful is a different kind of satisfaction. Also pain can be oddly cathartic in the right setting and headspace - just don't ask me to have my legs waxed, that's a step too far!

FF - Do you think that there is a certain stigma attached to women who indulge in it?

SM - Sadly I'd say yes there is. Being a submissive woman feels politically incorrect. But it's my choice, I have the freedom of that choice and I'm very wary of any kind of feminism that would try and stop me from making that informed choice. It doesn't stop me being feminist in other areas. I want my equality, so that I can choose – in the right circumstances and with the right person – to give it up for a little while. That doesn't make me a doormat, a simpleton or a throwback to a pre-feminist age, which sadly are some of the prevalent stereotypes.

FF - Would you say you need to have a certain type of mind set or could anyone get involved?

SM - Anyone can get involved. The fun of it is it can be whatever you want it to be from mild bondage and spanking to experimentation with toys to more hardcore and intense play. And thanks to Fifty Shades of Grey people are talking about it more and seem to be experimenting on spicing up their love lives, all of which can only be a good thing no matter what you think about the novels.

FF - Is it something you keep very separate from you everyday lifestyle and what made you want to release a book about your submissive experiences?

SM - My life is pretty normal most of the time. I have my job, my boyfriend; I pay rent on my house, see friends at the weekend. It's not like after 7pm I'm wearing a collar, lead and gag every night. It is part of my sex life (although not even all of it - in between intense experiences there's a fair amount of the less intense sex, cuddling and affection that you'd expect in more traditional relationships) but it doesn't define me. It's just a facet of my character - paired with my obsession with handbags, grammar pedantry and stubborn streak. That's partly what inspired me to write the book - to show it's not all red rooms of pain and helicopter rides. Normal people can and do indulge in this in ways that are fun and enriching without it involving sex contracts in triplicate.

FF - Finally, what can we expect next from you?

SM - Watch this space. Diary of a Submissive is being released in six countries, and there are possibilities of a sequel. In the meantime, I shall be continuing writing, watching the Olympics and playing lots of computer games.

Sophie’s book The Diary of a 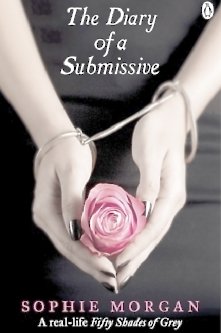 Submissive is published by Penguin and out now on Kindle / iTunes. It’s available in paperback from 30th August.  It has been described as ‘the real life Fifty Shades of Grey’, although Sophie would like to point out she doesn’t bite her lip and would get Silence of the Lambs flashbacks if a strange man offered to show her his red room of pain. Follow her on Twitter at @mssophiemorgan.

Kevin Hart: Ellen Degeneres is one of the...

How do I break away from the most intense...

Why is my partner spending so much time at...