How to support a partner going through breast cancer treatment

Just because your partner is going through treatment, doesn’t mean that they don’t need time to switch off, feel loved or be pampered.

25 years ago, there was no pink ribbon. Women around the world were dying from breast cancer and there was very little discussion about it. Evelyn H. Lauder saw an urgent need to bring breast cancer to the forefront and shine a spotlight on this world health issue.

In 1992, she became a pioneer ‘for the breast cancer movement, co-creating the Pink Ribbon and launching The Estée Lauder Companies’ Breast Cancer Campaign. A year later, she founded the Breast Cancer Research Foundation®(BCRF), a non-profit organisation, to generate funding solely dedicated to breast cancer research.

To mark the 25th Anniversary of The Campaign, The Estée Lauder Companies has a new mission: to create a breast cancer-free world. A bold, thought-provoking visual of a tattered Pink Ribbon is being introduced, showing the wear and tear of 25 years of hard work, dedication and impact trying to cure this disease. It also represents the hope that in 25 years, there will be no need for a pink ribbon; breast cancer will be committed to the history books. The Campaign no longer carries the word “Awareness” as breast cancer now has the global spotlight it deserves, moving into the future with a new rally – it’s time to end breast cancer.

We spoke to two women who have been affected by breast cancer with 20 years between them to find out what the differences and communalities have been in their experiences.

Melanie (57) and Alaina (38) both from Hertfordshire, have never met, but have shared remarkably similar experiences of breast cancer – though separated by 20 years.

While their experiences are separated by 20 years, Melanie and Alaina have navigated similar difficulties; from coping with the gruelling effects of chemotherapy; to losing their hair; to having to explain to their children that they had breast cancer. While Melanie’s sister has since developed breast cancer, neither of the women’s breast cancer is caused by genetics; it was just ‘bad luck’ in both their cases. But both were overwhelmed with support after they were diagnosed and had a huge amount help from family, friends and co-workers.

However, whilst their experiences have been very similar, 20 years makes a real difference and Alaina has noticed that people today are very aware of breast cancer and better understand what people need when they’re undergoing treatment. Fundraising events and sessions run by a variety of charities have helped to increase awareness over the years, and while Melanie found that no other mums in the playground in 1997 had ever met anyone with breast cancer, let alone someone in their 30s, communication has improved and Alaina knows lots of women who have also been affected by breast cancer, largely, she believes, because people are much more willing to talk about it now.

Alaina has also found social media to be hugely helpful. Melanie didn’t even have a mobile phone when she was being treated, but Alaina has been about to use Whatsapp and Facebook to keep her family and friends updated on her progress. While Melanie had to pass phone conversations to her husband when she couldn’t bear to repeat her updates to someone else, Alaina can simply post to a Whatsapp group with all her friends, or reply to a question on Facebook so everyone can see how she’s doing.

Both women agree that breast cancer is an awful disease and that a cure needs to be found soon to prevent more women from going through experiences like theirs.

Nine ways to get back to sex after breast cancer

My roommate has lost his friend to breast cancer- how can I help him? 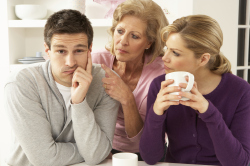 Kevin Hart: Ellen Degeneres is one of the...

How do I break away from the most intense...