First Date Nerves: Brits Limit How Much They Eat on Dates

First Date Nerves: Brits Limit How Much They Eat on Dates

The first date can be one of the most nerve-shredding experiences in life so it’s no wonder that many don’t feel up to eating much.

Surprisingly, it isn’t because their tummy is in knots with nerves that 20 per cent of Brits curb what they eat on a first date, it’s mainly because they’re scared their date is judging them!

That’s right; nearly a third of women will eat less on a first date so that their date doesn’t see them as greedy.

But it isn’t just women who are scared of being judged, men have admitted that they will eat differently on a first date too. 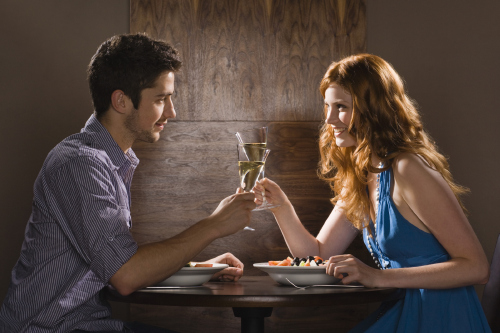 For men, it isn’t about looking greedy, they just want to look smooth and admit that they will order something that they think will impress their date.

You may think it crazy that we’d judge someone on what they ordered on the first date, but we do!

Women said that they expected their men to eat like men and 17 per cent said they wouldn’t go on a second date with a guy if he ordered a salad.

For men, they’re more worried about the state their wallet will be left in after the date and whether they’ve gotten value for money.

Four in ten men admitted that they wouldn’t go on a second date with a lady if she was to order the most expensive thing on the menu and then not eat it.

There is one thing that stood out for both the sexes though – manners.

Both men and women said that manners are incredibly important and over half said that they wouldn’t want to see their date again if they checked their phone for Facebook and Twitter notifications during dinner.

YO! Sushi, who conducted the research, found the top five dating turn offs to be:

Would you limit what you ate on a date? What are your biggest first date turn offs? Let us know by commenting below or tweeting us @FemaleFirst_UK

Win tickets to Santa: The Experience